I started becoming a fan of Keith Olbermann's about 2 months ago. I don't know what time his show is on, but when I channel surf across it I stop.

But after a his response to a recent Donald Rumsfeld speech I may have to find out when his show actually comes on.

Crooks and Liars has the video of Keith Olbermann delivering his special commentary on Rumsfeld.

Dissent and disagreement with government is the life’s blood of human freedom; and not merely because it is the first roadblock against the kind of tyranny the men Mr. Rumsfeld likes to think of as "his" troops still fight, this very evening, in Iraq.

It is also essential. Because just every once in awhile, it is right and the power to which it speaks, is wrong.

I think the reason Olbermann's words resonate with me so is that I have felt like people around me think I'm crazy for doubting the Bush Admin. Like somehow they're more American than I am just because I question.
Posted by pi22seven at 8/31/2006 11:03:00 PM No comments:

Am I treating the subject the way it should be treated? Am I putting in too much personal information? Am I over-emo-ing the whole thing?

After telling myself to just shut the hell up with the questions I've just decided to write a much simpler account and be done with it.

About 3 weeks ago I found out from my mother that I had an older sister that had been adopted. My mother was in no position to support a child and instead of running to Mexico to get an abortion she gave her daughter to a family that could take care of the child.

Pay attention to the following paragraph. In fact get a pencil and paper and draw a flow chart to keep track.

My sister started hunting for her birth parents for the purpose of getting medical records about 4 weeks ago only to find out she knew our mother and me. My mother was never sure about my sister's identity and never even told me about her. My sister's adopted sister has known for years and had become a friend of my mother's was the one who let my sister know who her birth mother was. I was totally unaware and convinced after years of evidence that I was an only child.

We had a meet and greet a couple of weeks ago and we get along pretty well.

She has regrets that we didn't meet sooner and I guess I do as well, but for her this has been a quest. She's known since she was 5 that she was adopted. She's dreamt of finding her "real" family.

I on the other hand am still a little numb. I've never had reason to entertain the idea of siblings, so when someone comes into my life to be my sister I just can't accept it. THE EARTH IS FLAT!

Part of this is because of the fact that I don't know how to be a brother. I've played a number of roles but nothing has prepared me this.

How do I be a brother? Do I try to make up for lost time? Exactly how much brothering am expected to do in a week?

I know that this is something that I'll grow into but at the moment I'm pretty much just winging it. 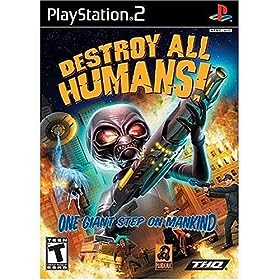 I got this at Best Buy the other day and I'm way hooked.

It's pretty campy in a "Plan 9 from Outer Space" kind of way with a gore factor of 8.7. This is my iBook. Well, it's a picture of the same model.

Our iBook has served us pretty well over the years. It's always booted up, took the OS X leap pretty well and been quite the little road warrior. It's had 2 problems in it's life. Apple replaced the video board for free after it crapped out, and I had to replace the keyboard after years of heavy, heavy use.

The DC in board though has been slowly breaking for years and I never got it fixed because of money probs. I just KNEW that it would be a costly adventure.

So I just let it go and figured out how to wedge things between the plug and the socket to maintain the power connection. I started with small things like a toothpick but at the end I was using a Dremelled chopstick wedge. At least I did until 2 weeks ago when it finally said "Fuck it" and broke.

Looking around on the INTERNETS I found that the DC In Board when in stock range in cost from $35 to almost $100. That's just for the part, no installation included. The local Mac fixxxxxer said he could turn it around in a day after getting the part overnighted but he wouldn't give me a guestimate on price. That sounded like bad news to me.

The main reason I was being cheap is that we were going to Atlanta later that week so my wife could attend an RWA convention (see if you guys can figure out what RWA is) and I didn't want to . She would need the laptop to stay in touch with her agent and others. We even entertained getting a new Macbook with a free iPod and printer/scanner until the salesguy at the local Apple Store said he didn't have any in stock.

With some advice from Zapski at teh AAF, I decided to try and fix it myself.

I found some instruction online a proceeded to rip the thing apart. The instructions were 14 pages long but chock full of idiot proof pictures and in no time I had parts all over our dining room table. After getting the DC board out I found the 3 solder pads that had come loose and soldered them back on and 15 minutes later the clamshell was together and running again. There is a little gap in the case on the left side but it feels solid, plus it looks kinda cool in a junky way.

I really. really, really wanted a new Macbook and free stuff, but getting new stuff isn't a good way to save moneys. :waah: